When I last wrote about New Japan Pro Wrestling, exactly a week ago, I mentioned that Jay White had just beaten Tetsuya Naito for the IWGP Intercontinental Championship.

It was an important result as Naito is one of the wrestlers to have voiced an eagerness to leave the two nights of this coming January's NJPW Wrestle Kingdom 14 events with both the Intercontinental and IWGP Heavyweight Championships.

In the post, I wrote that I didn't think Naito was done for as I felt that there was a chance he could reclaim the IC title either before the first night of Wrestle Kingdom or - better yet - on January 4th and then challenge whoever is holding the IWGP Heavyweight Championship the following evening.

I like the idea of the winner becoming champion on consecutive nights, so - just like last weekend - I refuse to count Naito out. For now.

A betting market, which was created by Kambi and allows customers to wager on who they think will be IWGP Heavyweight Champion at the end of the second night of Wrestle Kingdom, was republished yesterday afternoon.

Adjustments have been made following White's win at Destruction in Kobe. His price to be holding the strap has halved from 10/1.

This year's G1 Climax winner - Kota Ibushi - who is holding the contract to challenge the IWGP Heavyweight Champion on night one has now been taken down to 3/4 favourite. When the market was first published, he was an even money fave.

It's worth noting is the fact that, following his contract/briefcase defence against KENTA at Destruction in Kagoshima, Ibushi promised his hometown fans that - the next time they see him - he'll be a double champion.

KENTA, who was technically in contention as he was facing Ibushi for the Wrestle Kingdom contract in the aforementioned match, has been taken off the board.

A conspicuous absence on this list is Hirooki Goto, who could potentially be Jay White's next challenger for the Intercontinental Championship and, if so, would become what I would call a technical contender as he would be in position to win the IC Title.

Ibushi and White aren't the only wrestlers whose prices have decreased following the Destruction events.

IWGP Heavyweight Champion, Kazuchika Okada, remains a second-favourite, but his odds have declined from 2/1 into 33/20.

He will challenge Okada for the IWGP Heavyweight Championship at King of Pro Wrestling on October 14th.

Of the selections that have drifted out, two stand out. Naito from 7/4 to 2/1 obviously as I still believe he will be in the mix come January 4th and 5th.

And then there's EVIL

EVIL will challenge Ibushi for the contract at King of Pro Wrestling. I doubt he'll go on to win, but it was interesting to see that his price increased rather than stalled or dipped as - just like KENTA before him - he is, as I wrote above, technically in contention. For now.

The market in which customers could bet on the exact composition of match participants for the January 5th IWGP Heavyweight Championship contest was not republished yesterday. Below is a table showing all of the changes that have been made to the one that was. 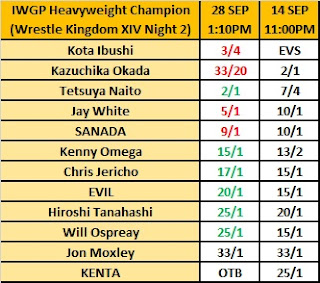