Sky Bet's oddsmakers have opened books on the WWE Championship match that's scheduled for the October 4th Smackdown and two bouts that have already been announced for WWE Hell in a Cell 2019.

On this week's WWE Smackdown, Brock Lesnar issued a challenge to Kofi Kingston for the WWE Championship. The request accepted and the two will meet on Smackdown's debut on FOX. 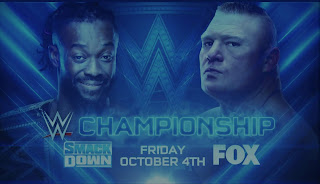 The firm has installed Lesnar as a 1/3 favourite to win the match. A successful defence for Kingston will pay out at odds of 9/4.

For what it's worth, Brock Lesnar has also been moved to 1/3 in the 'WWE Champion After Kofi Kingston' special that's also available from Sky Bet.

Two nights after the FOX show, WWE will air its WWE Hell in a Cell 2019 event from Sacramento, California. Already confirmed for the show are two Raw title matches.

The first will see Becky Lynch defend the women's title against Sasha Banks inside Hell in a Cell.

Banks won their Clash of Champions meeting by disqualification and has been installed as a favourite to win here in another cell match. She's 2/7 to the champion's 9/4.

WWE Universal Champion -Seth Rollins - will defend his title against Bray Wyatt as well. As of this morning, Sky Bet lists the challenger as a 1/5 favourite. A decision in favour of Rollins is being offered at 10/3.


Buy The Latest WWE Merchandise From WWE Shop
Posted by David Taylor at 11:06