Two matches received match of the night honours in Dave Meltzer's review of this past Sunday's WWE Survivor Series.

The joint-winners were the men's Survivor Series elimination match and the NXT Championship contest which saw Adam Cole beat his challenger, Pete Dunne.

Four-and-a-quarter stars were awarded to the two contests.

With there being a tie at the top, the oddsmakers from Kambi will settle their 'Highest Rated Match of the Night' market under the dead-heat rule.

From betting, the punters were seemingly on the correct sides as they were the only bouts in the market that had their prices shorten. As you'll see below, the 'NXT Championship' match was moved from 5/2 into 9/4 joint-favourite on the day of the event.

The selection for the men's elimination match was lowered from 9/2 into 17/4 on the same day. 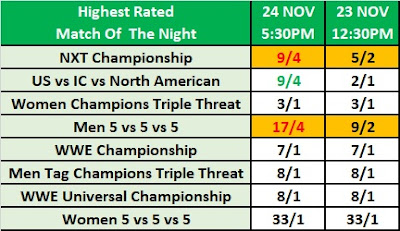 I was one of the gamblers who backed the Cole .vs. Dunne match to be the match of the night. I placed my wager on Sunday when I knew for sure that Pete Dunne was Cole's challenger after winning the triple threat the night before.

A proposition wager, in which customers could bet whether or not there would be 'Joint Winners' in regards to Dave Meltzer's highest rated match in his Survivor Series review, has been settled with the winning selection being 'Yes'.

The selection was a 9/5 underdog to the 4/11 that was being offered for two or more matches not having the most stars ratings in Meltzer's coverage of the PPV.

With four-and-a-quarter stars being the highest number given from Meltzer in this review, a market which asked customers to gamble on the 'Exact Star Rating' of the highest rated match (or matches in this case as joint-winners counted), has been won by the selection that covered '4.25 - 4.50 Stars'.

The two best matches also featured in a couple of head-to-head specials that Kambi created for the event.

Adam Cole .vs. Pete Dunne was up against the AJ Styles .vs. Shinsuke Nakamura vs Roderick Strong triple threat in the first head-to-head. The two matches were each given EVS by the bookmaker while the option to gamble on the two bouts having the same amount of points was 2/1.

The NXT Championship match's four-and-a-quarter won over the three-and-a-half stars that its opposition received.

The men's elimination match was up against Shayna Baszler .vs. Becky Lynch .vs. Bayley in the other matchbet. The eventual winner was 11/10 while the ladies were 3/4. 'Same Star Rating' was offered at 5/2.

The 4.25 for the men eclipsed the two stars that the ladies were awarded.

There was a third head-to-head available last week. In it, the two major men's title matches were up against each other.

As you'll see below the 'WWE Championship' match (Brock Lesnar .vs. Rey Mysterio) went from 11/10 to 4/5 favourite while the WWE Universal Championship' (Bray Wyatt .vs. Daniel Bryan) flipped from 4/5 fave to 11/10.

The winning selection turned out to be the contest for the Universal Title as it had three-and-a-half stars to the two-and-a-half for Lesnar .vs. Mysterio.

In yesterday's post, I went through the star ratings over/under markets that Kambi had for NXT TakeOver: War Games 2019. For the remainder of today's post, I'll cover the over/under specials that Kambi published for the following night's event.

Before I begin, here's an at a glance at the lines, stars and results for all of the matches Kambi covered for this year's Survivor Series.

Tag Team Triple Threat
The line for the triple threat match featuring the company's tag team champions was set at 3.75 stars and - as you can see in the table below - the 'Over' started out as a 17/20 favourite. However, by Saturday 23rd November (the day before the event), the favourite was the 'Under' as it had fallen to 3/4 from 21/20.

The wagering turned out to be on the correct side as Dave Meltzer graded The Viking Raiders' win over The New Day and The Undisputed Era at three stars.

No adjustments were made to the market in the short time it was available. The winning selection turned out to be the 'Under' as Meltzer's review gave the match two-and-three-quarters.

The eventual winner was 23/20 for the entire weekend.

Styles .vs. Nakamura .vs. Strong
As you already know, the triple threat match featuring all of the secondary titleholders in the company was rated three-and-a-half stars in Dave Meltzer's review.

This result fell below Kambi's estimate of 4.25 Stars.

As you can see above, the eventual winner started off as a 7/10 favourite. It was snipped to 4/6 on the weekend of the event.

NXT Championship
With the number one contender for Adam Cole's NXT Championship being decided during Saturday's NXT TakeOver event, the Over/Under market for Cole .vs. Pete Dunne was created on the morning of the event.

The line was set at four stars, so it was the 'Over' which won. The selection was a 4/6 favourite over the 13/10 for the 'Under' and the 9/4 that would have been settled if Meltzer rated it 'Exactly 4 Stars'.

The winning option started out at 5/2, when the market was first installed in mid-November. It was then brought up slightly to 13/5 due to the 'Under' being cut from 3/4 into 11/20.

The 'Over' was backed from 4/5 to 13/20 by November 19th. However, there was a line adjustment made on November 21st as the bookmakers increased it to 3.5 Stars. I surmise this may have been due to at least a trio of reasons: (a) Interest in 'Over 3 Stars' already (b) the stipulation changing from a regular match to a no holds barred and (c) Paul Heyman promising, during a segment on that week's Raw, that the match will be longer than what we had recently grown to expect from a Brock Lesnar contest.

Dave Meltzer rated the match two-and-a-half stars, so the winning selection turned out to be the 'Under' whichever way you look at it from a line perspective. The best price for 'Under 3 Stars'was the 5/4 it drifted to from 11/10 when the 'Over' was backed. The 'Under 3.5 Stars' was a 7/10 favourite from the Thursday right up to the night of the show.

Baszler .vs. Lynch .vs. Bayley
Shayna Baszler's win over Bayley and Becky Lynch, in the event's final match of the night, was given two stars from Dave Meltzer. This fell below the 3.75 line that Kambi had for the bout.

As you can see below, the market was first installed around November 9th. The prices - or the line, for that matter - didn't change at all in the entire time it was available.

I'll be back next month with any star ratings proposition coverage for WWE Tables, Ladders and Chairs 2019. If not, then it'll surely be for the NJPW Wrestle Kingdom 14 markets that have been available since November 9th.