The oddsmakers from Kambi have released markets for next year's NJPW Wrestle Kingdom 14.

The event will take place across two nights from January 4th 2020. In this post, I'll go through the markets that are available.


Night One
As I had speculated on this very blog, the first night of Wrestle Kingdom 14 will see both the IWGP Heavyweight and Intercontinental Championships defended. Then, the following night, the two titleholders will wrestle to crown the first-ever double champion.

The first market for night one sees Jay White listed as a 7/4 underdog to successfully retain the IWGP Intercontinental Championship against Tetsuya Naito.  A win for the challenger will pay out at odds of 2/5.

Kambi has a Wrestling Observer star rating Over/Under market for the match. The line for it has been set at four-and-a-half stars.

IWGP Heavyweight Champion - Kazuchika Okada - will defend his title against this year's G1 Climax winner, Kota Ibushi, in the other title match on the opening night.

The IWGP Junior Heavyweight Championship will also be on the line on night one when Will Ospreay defends his title against the returning Hiromu Takahashi.

Takahashi last wrestled in July of 2018 after sustaining a broken neck on the NJPW show in San Francisco. He successfully retained the Junior Heavyweight Championship against Dragon Lee in the ring, but was forced to relinquish the title following the injury.

January 4th will be Takahashi's moment to try and reclaim the strap in his first match back. The oddsmakers have him as an 11/20 favourite while a decision for the titleholder will pay out at odds of 5/4.

Kambi's star ratings line for Ospreay .vs. Takahashi is four-and-three-quarters.


Night Two
Chris Jericho versus Hiroshi Tanahashi is one of the attractions of night two. As of this afternoon, Kambi lists Tanahashi as a 1/3 favourite. A decision in favour of Jericho will reward the gambler at odds of 2/1.

The star ratings market has the line set at four-and-a-quarter.

With the Champion .vs. Champion match competitors unknown until the conclusion of night one, the bookies have republished a special that first came out in mid-September in which customers can gamble on the person they believe will leave night two as IWGP Heavyweight Champion.

As there are only four wrestlers left in contention, all of the other selections have been taken down leaving Tetsuya Naito a 19/20 favourite (he was 6/4 when the market was last made available in October), Kazuchika Okada and Kota Ibushi are 2/1 joint-second favourites (Okada remains at the price he was previously, but Ibushi has drifted from 17/20) and Jay White at 11/2 (up from 9/2). 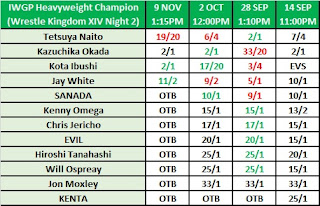 In all of the posts I've written about the market, I've pointed out that Naito was one of the first people to talk about winning both titles at the same time (If I recall correctly, Hirooki Goto might have been the first). In my opinion, Naito is correctly positioned as favourite.

As for determining who - out of Kazuchika Okada and Kota Ibushi - should be second, I would have to go with the latter. This is because I prefer the scenario of the double champion winning titles on consecutive nights.

I suppose this means I haven't completely ruled out Ibushi, but I'm sticking with Naito...