On Saturday afternoon, I published a post noting that the oddsmakers from Kambi had created match winner markets for January's NJPW Wrestle Kingdom 14 and had also republished a special in which customers could gamble on who would walk out of the second night as IWGP Heavyweight Champion.

Later that weekend, the bookmakers republished another special that was available for night two - a market in which clients could gamble on the 'Exact Composition' that will feature in the IWGP Heavyweight Championship match.

Now that we know that the title versus title match is official for the event, as well as the four wrestlers who have the chance of leaving the Tokyo Dome as double champion, the bookies have eliminated all other possibilities leaving the four potential match-ups. 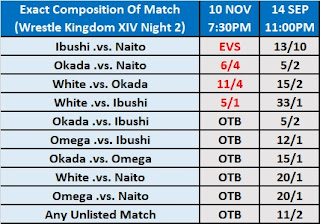 On Sunday evening, I also noticed that the bookies had installed a match winner for the match. As we won't know who will be competing in the title versus title contest until the conclusion of the first night, the bookies are offering the selections as 'Heavyweight Champion' (whoever wins out of Okada and Ibushi) and 'Intercontinental Champion' (Jay White or Tetsuya Naito).

With Naito a favourite to win in the outright market, it should come as no surprise to see the 'Intercontinental Champion' selection at 4/5 to be victorious over the 'Heavyweight Champion' at 9/10.