All of the propositions and the odds for their respective 'Yes' and 'No' selections can be read in the image below. 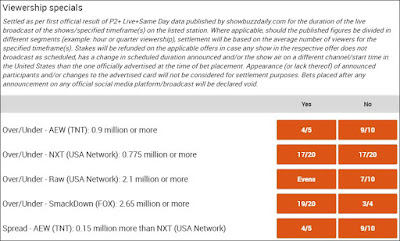 Some of the results from this week's TV shows have been delayed due to the Thanksgiving holiday in the USA.

ShowBuzzDaily.com - the site that Kambi uses to grade its audience props - has announced the current ETA for the results. If I've read the schedule right, the results will be published in the following ways:


I don't know whether I'll wait until I have the results from all three shows to write about them or do one on Monday and then the Smackdown one on Tuesday. They will be done, though.

5:00PM GMT UPDATE: Smackdown's number was released on its regular schedule of Saturday. I wrote about it IN THIS POST.
Posted by David Taylor at 13:04