Kambi has published its pro wrestling TV viewership prop bets for this week.

In this post, I'll go through each market in the order of how they appeared on the websites with Kambi's markets this morning. I'll also take another look at a CM Punk TV special that I wrote about yesterday. 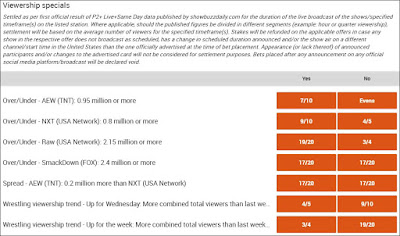 The first prop on the page is for AEW Dyanmite's number. The bookmaker asks whether the episode will have a total average audience number of 950,000 or more. 'Yes' is a 7/10 favourite over the option to bet below that number, which is 'No' at EVS.

The second proposition market is for the other wrestling show for Wednesday night - NXT on the USA Network. This time, the customers have to choose whether NXT will have an audience of 800,000 or above. Those who think it will can find the 'Yes' at 9/10. The 'No' is a 4/5 favourite.

'2.4 Million or more' is the line for Friday night's Smackdown on FOX. As of this morning, both the 'Yes' and 'No' selections are available at 17/20 each.

The last three props on the page are other kinds of specials that are specific to the audience totals.

In the market titled 'Spread', the bookies have asked the customer whether AEW Dynamite will have '0.2 Million more than NXT'. Those who believe AEW will beat its competition by 200,000 or above will find the 'Yes' at 17/20. Those who think otherwise can back the 'No', which is also at 17/20.

The penultimate proposition is all about Wednesday's TV. Customers have the opportunity to bet whether or not there will be more combined total viewers of AEW and NXT than last week.

The final prop is similar. However, it asks the customers whether the total numbers of viewers for all four shows will beat last week's number.

In a post published yesterday, I pointed out that there is technically another TV prop bet for this week as - in the CM Punk specials - there is an option to wager on Tuesday's episode of WWE Backstage pn FS 1 breaking the viewership record for the show.

The record is 597,000 for what was a special debut airing. I strongly believe the number was assisted by a baseball game that preceded the episode. A second special, which had 426,000 viewers, was also helped - in a way - by being on Friday night with WWE able to advertise its existence on the other FOX channel during Smackdown.

I feel that Punk will make a difference this week. However, I can't see it being in the - pardon the pun - same ballpark as the baseball assisted number. My uneducated guess is it will be close to - or in - in the 300,000 range which would be near a 200% jump from last week.

The odds for the record not being broken, even with Punk appearing, has been taken down from 3/5 into 1/2 since yesterday's post.