Kambi's WrestleMania 36 markets that I first wrote about a week ago were republished today after having been taken down ahead of this week's pro wrestling TV shows. Along with their reintroduction were new specials for the April 5th 2020 event.

They're 'Exact Composition of Match' markets in which customers can gamble on whether much rumoured WWE Championship or WWE Universal Championship matches will take place on the card or if another bout will be contested for the respective title.

For the WWE Championship market, the bookies have Brock Lesnar .vs. Cain Velasquez at 7/4 to be the title match. The option to bet on 'Any Other Match' is a 2/5.

If you've read anything from me from the summer, you'll be aware that at the top of my predicted WWE Championship matches at Mania 36 is Brock Lesnar .vs. Kevin Owens.

I'm feeling all the more confident that's the direction as Owens has been moving up to Raw's top babyface now that Seth Rollins is seemingly on his way to rejoin the heel side of the Raw roster.

The thing with Lesnar .vs. Velasquez, if you look at their first WWE match at Crown Jewel 2019, is there wasn't much of a hint that the company would go back to those two so soon.

For what it's worth, and I don't mean it's worth anything, I read an article earlier this week that sourced TalkSport's Alex McCarthy who claims that Velasquez and Tyson Fury are the two names that are being talked about for Brock Lesnar's WrestleMania opponent.

In what could be a related reaction, Kambi's Mania main event market has slashed the odds for Lesnar .vs. Fury to close the show from 33/1 into 12/1.

I cannot see Fury being in any plan for Lesnar for the spring and even if I could, I have a hard time seeing that bout going on last.

It makes no sense considering Fury's recent involvement with WWE was paid for with Saudi money and - even if Fury were to return so soon - the company has already flat out promised that he'll be in a tag team match with Braun Strowman as his partner.

The most obvious Lesnar opponent is Kevin Owens. Put it like this - if I was one of those 'reporters' who like to write, if you pardon the pun, BS stories - then I would be claiming Lesnar/Owens was the plan because that's the match that seems to make the most sense considering the heel champion should be going up against the brand's top babyface.

Either that, or I'd go with the longshot guess and say that Keith Lee - who was positioned strongly at the Survivor Series last month - was the plan for Lesnar.

If you read last week's post, you would have seen that I thought Keith Lee was a conspicuous absence in the market in which customers can bet on who they believe will be holding the WWE Championship at the conclusion of WrestleMania.

I requested Lee's name to be inserted into the market at 5:13PM GMT last Saturday. I then had an email at 12:49AM GMT on Tuesday morning to say he had been added. But, here's the thing, as you can see by its time, the email was sent eleven minutes before the start of Raw. There was no way the market would have still been available when I was informed of the addition.

When I brought this up with customer services, I was told that requests have to be sent a week in advance, which would obviously contradict any 'others on request' rules for markets that are first released on weekends of pay-per-views.

With all that said, as you can see below, Keith Lee is 17/2 to be the WWE Champion when all is said and done in the early hours of April 6th.

Kevin Owens' price has decreased across the week. He started off at 12/1 on Saturday, was down to 8s on Sunday, was at 7/2 on Monday a few hours before the market was closed ahead of Raw and has now fallen to 11/4. 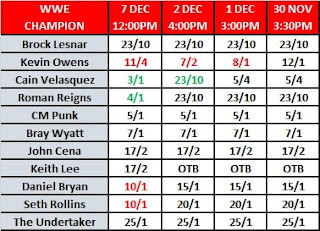 Over in the WWE Universal Championship market, a Bray Wyatt .vs. Roman Reigns match is a 1/3 favourite while 'Any Other Match' is 2/1.

When I wrote last week's post, I wrote that I agreed with the bookmakers having Roman Reigns and Bray Wyatt at the top of their WWE Universal Champion 'at the end of the listed event' market as I had a feeling that Bray Wyatt versus Roman Reigns could be the title match on April 5th.

Now that The Miz will get to wrestle Bray Wyatt at TLC a week from tomorrow, I surmise that Daniel Bryan will get his second title opportunity - against Wyatt - at the 2020 Royal Rumble so I think it's fair - if you look at the table below - to see that the bookies have snipped Daniel Bryan's odds to be holding the title at the end of Mania 36 from 7/2 into 3/1 just in case it ends up with Daniel Bryan -as WWE Champion - defending the strap against Roman Reigns in April. 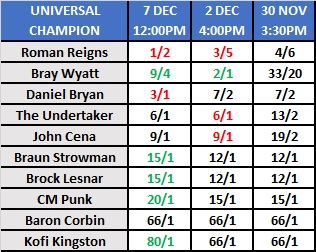 Bray Wyatt versus Roman Reigns is still a favourite to be the main event of next year's Mania. As of today, the selection is 2/1. This is down from the most recent price of 3/1.

I've highlighted the selection for a Daniel Bryan versus Roman Reigns match as its price has drifted out from 25/1 into 40/1. Seeing it at 40s made me consider it worthy of a speculative punt just in case WWE goes with Bryan .vs. Reigns even though I've already guessed it'll could be Wyatt/Reigns and Bryan/Nakamura (I had already backed Bryan/Reigns with Sky Bet and Kambi before today).

The bottom line - until Bryan is out of the equation for sure, 40/1 for a match that was kind of hinted we'd get over the summer/autumn - but not given! - as well as the fact that, when being interviewed earlier this year, Reigns stated that Daniel Bryan was one of his dream opponents for a WrestleMania. 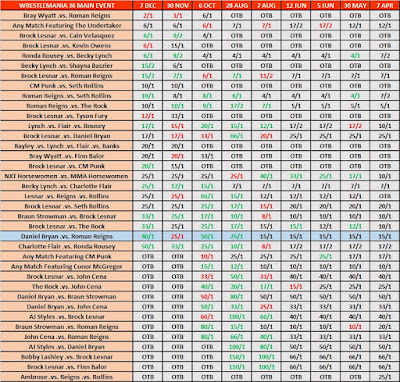 With all that said, Bryan being in the title picture for the Royal Rumble - if that's the plan - could simply be a way to have him as a challenger just so the Rumble match goes off without fans clamouring for a Bryan appearance in the battle royal.

Having Bryan tied up in a title match eliminates one problem. The audience wanting CM Punk to be an entrant is another.