The Los Angeles Times is reporting that the city's SoFi Stadium will be the host venue of WWE WrestleMania 37 on March 31st 2021.

Once the site is confirmed by WWE, Kambi will settle a couple of betting markets that were released last March in which customers could gamble on the venue and time zone of the 2021 edition of WWE's biggest night of the year.

The selection - appearing as 'LA Stadium At Hollywood Park' because the building was only given its 'Sofi Stadium' title in September of 2019 - was added to the host venue market a day after it was initially priced up after a WWELeaks visitor said it was a conspicuous absence from the list that Kambi had created.

Opening at 7/2 on March 11th, the selection was eventually cut into 4/9 favourite in mid-May. It remained a favourite for the remainder of the time the market was available. However, it drifted out to 13/25 in late-August and remained at that price for the rest of the market's life.

The last time it was available was in November. 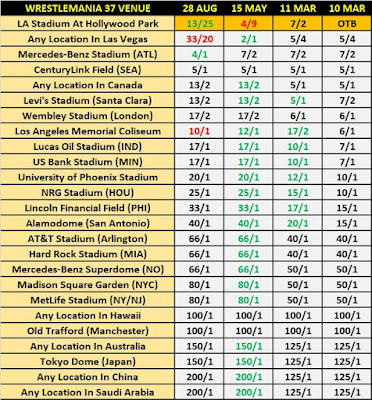 With the event being held on the west coast of the United States - and therefore on Pacific Standard Time - the winning selection, in Kambi's 'Location Of Host Venue' market will be 'USA West Coast'.

As you'll see below, the selection was a 2/5 favourite on the day the market went live. This is due to the fact that 'Any Location In Las Vegas' was a 5/4 favourite in the aforementioned 'Venue' market.

The selection was pushed out to 11/25 in the middle of May which - as I noted in THIS POST - was quite surprising as it was the same day that the selection for the Los Angeles venue fell into favouritism.

The 'USA West Coast' drift was due to the an east coast WrestleMania having dipped from 5/4 into EVS.

By the late-Summer, the eventual winner was down to 1/3 and remained at that price until it was last available in November.

Both markets will be settled once WWE confirms where the event will be held next year.