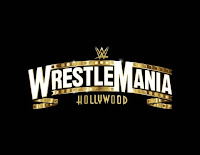 As I noted in the most recent post, the Los Angeles Times reported that next year's WrestleMania is set to take place from SoFi Stadium in LA.

WWE has just sent out a press release to confirm the news.

Included is an image of the logo for the event.

Everything that the LA Times reported was accurate. The show will take place on March 28 2021.

The stadium closed as a 13/25 favourite in a betting market in which people could gamble on the 'Host Venue'. You can read all about it IN THIS POST.
Posted by David Taylor at 14:24