Now that the numbers have been released, a trio of proposition markets for last night will be settled by Kambi.

In the AEW Dynamite market, customers were asked whether the show would get a total average of 800,000 or more. The winning selection, 'Yes', was 19/20 while its opposition was 3/4.

The third special asked whether AEW Dynamite would have 100,000 or more viewers than WWE NXT.

The difference was 390,000 so those who may have backed the 'Yes' will have bets settled in their favour at even money odds. 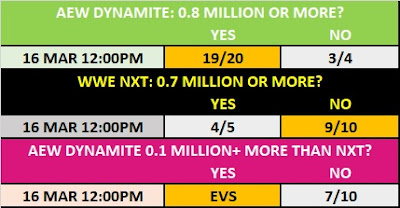