Here are some notes concerning the WWE Money in the Bank 2021 PPV.
Liv Morgan Becomes 5Dimes' Favourite and Vega Also Drops
The most noteworthy thing I've seen, when looking through this morning's prices, was to see that 5Dimes has made Liv Morgan the odds-on favourite to win the women's ladder match.

After starting at +215 yesterday, Morgan's price had increased to +235 by the evening. She is now into -110.
Another selection that appears to be getting interest from 5Dimes customers is Zelina Vega, who who lowered from +1,200 into +1,000 yesterday and is now at +850 as of this morning.
BetOnline Publishes Women's MITB Ladder Match Market
I received word from BetOnline, shortly before last night's Smackdown, that the company had released a market for the women's Money in the Bank ladder match. The prices are still the same as of the time of writing.

BetOnline Lowering Riddle's Price
As noted in previous posts this week, Riddle had become a favourite to win the men's Money in the Bank ladder match with the UK's Sky Bet firm and offshore sportsbook, 5Dimes.
BetOnline has not made Riddle a favourite. However, the selection for a Riddle victory has been on the decline with the sportsbook. 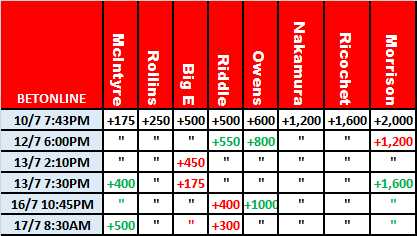 As you can see, BetOnline dropped Riddle from +550 into +400 last night. The oddsmakers have since cut that price into +300.
Big E Returns To Slight Favourite On 5Dimes
On last night's Smackdown, Big E was the fall guy to Seth Rollins in a fatal four-way match which also included King Nakamura and Kevin Owens. 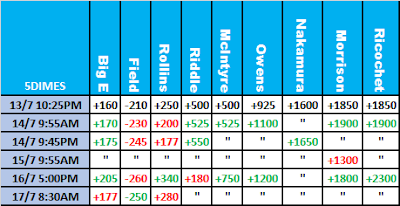 Both men involved with last night's finish have had their prices reduced with Rollins dropping from +340 into +280 and Big E moving in from +205 to +177.
The dip into +177 places Big E back into favouritism albeit slightly due to Riddle sticking on +180.
Smackdown Tag Markets Published
Paddy Power and BetOnline have both published markets for the Smackdown Tag Team Championship match that is scheduled for the event's Kick Off.
Both companies list The Mysterios as favourites over their challengers - The Usos.
Bet With 5Dimes
View BetOnline's WWE Markets
Posted by David Taylor at 09:13