With reports that CM Punk and Daniel Bryan are possibly on their way to join All Elite Wrestling, the oddsmakers from BetOnline have published a market which allows customers to bet on who could be Punk's first official opponent with the company.

There are two joint-favourites as of right now with Bryan and Darby Allin both available at +200.

The latter delivered a promo on the most recent episode of AEW Dynamite following the news that Chicago's United Center will host 'The First Dance' on Friday August 20th. In his short speech, Allin stated that AEW is the place where wrestlers can prove themselves and went on to say 'even if you think you're the best in the world'.

Allin using Punk's moniker of 'The Best in the World' strongly teased a meeting between the two. It fairly places him as the one of the favourites in this market.
The list of nine selections, which has some conspicuous absences, concludes with Allin's mentor - Sting, who's +1,000.
All of the selections and prices, as of the time of writing, can be viewed below: 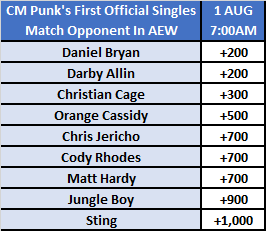 Prices were correct as of 7:00AM BST and at the time of writing today.
View BetOnline's Wrestling Page
Posted by David Taylor at 11:02

Email ThisBlogThis!Share to TwitterShare to FacebookShare to Pinterest
Labels: All Elite Wrestling Betting