Kambi has adjusted a betting market I wrote about yesterday evening.

It's a special in which customers can place bets on the next person, who's currently signed to WWE, to make an appearance on any All Elite Wrestling broadcast between the time the bet is struck right up until January 1st 2022.

In yesterday's post, I noted that Dave Meltzer stated - on yesterday's Wrestling Observer Radio - that the then favourites, Karl Anderson and Luke Gallows, were likely to remain with WWE and get new deals when their current contracts expire at the end of this year.

I had noted in previous posts that there was a report that Anderson and Gallows were expected to leave once their deals expired. However, Anderson had denied those reports.

Still - it made sense to see 'Luke Gallows and/or Karl Anderson' as the favourites when Kambi's market was initially published.

Gallows and Anderson now having a more prominent role in a WWE storyline - as sidekicks of AJ Styles - along with the report that they're likely to stick with the company has resulted in the early favourite pushed out from 9/10 to 9/4.

They have been replaced by two selections - 'Dash Wilder and/or Scott Dawson' and 'Shinsuke Nakamura'. Both are 13/10.

Nakamura was 7/4 and the option to punt on either of The Revival making the move was 5/2 before last night's changes.

A couple of other selections were snipped as well.

The list of names, and their current odds after last night's adjustment, can be viewed below: 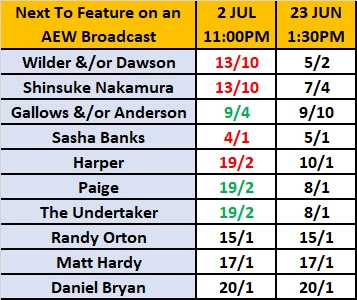