The first match in a tournament to crown inaugural All Elite Wrestling Tag Team Champions will take place on tonight's episode of AEW Dynamite. It will see The Young Bucks and Private Party in a battle to progress into the next round.

This past weekend, Kambi's oddsmakers released a handful of betting opportunities for the tourney.

The first is an outright winners market which allows clients to gamble on the team - or teams - they believe have a chance of being crowned the first-ever AEW World Tag Team Champions.

At the top of the list - at EVS - are the Young Bucks. They're followed by Jurassic Express and The Dark Order as 3/1 joint-second favourites.

The list continues with every other team that's competing in the tournament and ends with Best Friends at 15/1. 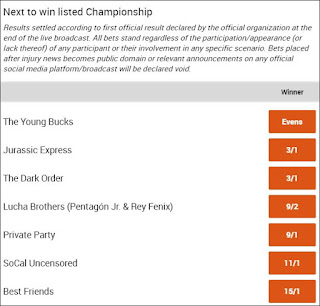 As mentioned above, there are more than just the outright winner special.

In one market, clients can gamble on The Young Bucks versus The Field. The punters get the same price of The Bucks to win the tourney (obviously!), but there's a 7/10 pricing on 'Any Other Participant' being crowned champs on October 30th. 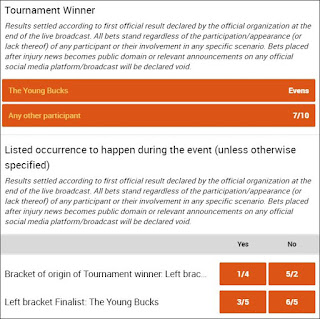 As you can see above, there are two proposition markets under 'Listed occurrence to happen during the event (unless otherwise specified).

The first asks customers whether the 'Bracket of origin of Tournament winner' is the 'Left Bracket'. That side of the bracketing consists of the Bucks, Private Party, Lucha Brothers and Jurassic Express while the other side has Best Friends, SoCal Uncensored and The Dark Order. There are only three teams on the right side of the bracket because The Dark Order have won a bye into the semi-final and will meet the winners out of Best Friends and SoCal in two weeks.

The other proposition asks the customers whether The Young Bucks will represent the left bracket in the October 30th final.'Yes' is a 3/5 favourite over the 'No' at 6/5.

Finally, there's a market in which punters can gamble on The Young Bucks'  'Stage of Elimination' the options are 'Eliminated in quarter or semi final' at 23/20, 'Runner Up' at 11/10 and - just like the other markets for the Bucks to win - the 'Tournament Winner' is EVS. 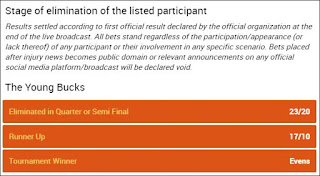