I've realised that the information in the below post is misleading. In the original post from hours earlier, I had the wrong screen capture and misinterpreted that lines had been adjusted when in actual fact they were the same prices from earlier that morning. Apologies for any confusion. You can read the correction in THIS POST.

There have been changes made to the TV viewership proposition markets I wrote about THIS MORNING.

First, here's a capture of the current markets and their respective odds. 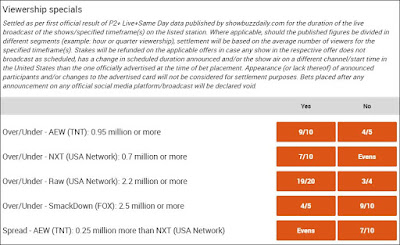 The Monday Night Raw line has been cut from '2.35 Million or More' to '2.2 Million or More'. It you read this morning's post, you would have seen that I felt that this could be a win for the 'No' as Raw will be up against two of the NFL biggest teams in the New York Giants and Dallas Cowboys.

A spread special, in which customers could gamble on Smackdown picking up 250,000 or more viewers than Raw has been taken suspended while one for AEW Dynamite versus NXT - which also has a spread of '0.25 Million' - has seen the 'No' move in from 3/4 to 7/10 while the 'Yes' has increased to EVS.