I have not been any good when it comes to predicting how the King of the Ring tournament would end up going.

In the hours leading into the initial bouts of the first round, I published a post titled 'My KOTR Bracket' and I had Drew McIntyre as the overall winner.

A week later, he was eliminated by Ricochet.

Earlier this week, I released a similar post. This time, it was titled 'My Bracket 2.0' and I opted to go with Andrade becoming king.

And then Tuesday night's Smackdown happened.

This one could be controversial, but I've reached the stage where I've realised that it's probably best just to go against what I expect and go with something random. 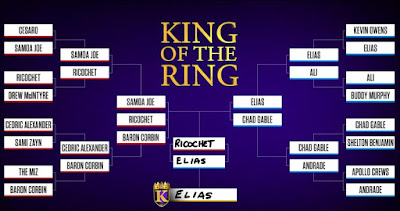 Yes, I have Elias becoming king. And you will not believe how close I came to writing 'Shane McMahon' in the panel where we're meant to say who we think will win the final and become king.

As for the Elias pick - there's sort of a method behind my madness.

I have Ricochet winning the triple threat on Raw. The reason why I've done this is because he's in a match against two heels and I feel it tells a better story if he overcomes this disadvantage to progress to the next round.

The obvious other story is Ricochet is protected if, say for example, Corbin gets the decision against Joe.

However, sticking with my story...

If you watched this week's Raw, you would have seen Baron Corbin campaigning to have a bye into the next round following the double pin/draw in the Samoa Joe .vs. Ricochet match. This will come into play later on as I think they should have Riochet get the decision against Joe in the three-way.

Corbin not being involved in the finish could end up in him complaining about the result after the match and into the PPV. More on that later.

Chad Gable has been on a bit of a streak in Smackdown's side of the tournament, but I have to reluctantly go with Elias here as I feel (a) Ricochet should work with a heel in the final and (b) the King of the Ring gimmick itself is suited for a heel.

Ricochet losing to Elias could be due to interference from Corbin and then we'll all have to hail The King of Rock 'N Roll.
Posted by David Taylor at 09:55